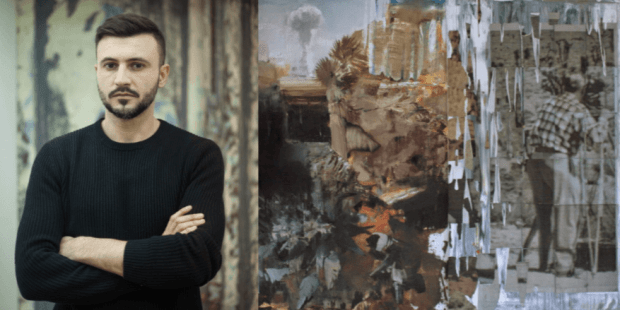 (b. 1977, Baia Mare, Romania) graduated in 2001 from the University of Art and Design, Cluj, Romania. He has been the subject of solo exhibitions at museums including the Museum of Contemporary Art Denver (2012–2013); Stedelijk Museum voor Actuele Kuns (S.M.A.K.), Ghent (2010–2011); and National Museum of Contemporary Art, Bucharest (2009–2010). His work has been included in exhibitions at the Palazzo Grassi, François Pinault Foundation, Venice; Tate Liverpool; Prague Biennial; San Francisco Museum of Modern Art; and Fondazione Palazzo Strozzi, Florence, among others. In 2015, he represented Romania at the Venice Biennale. Ghenie’s work is held in a number of public collections, including the Hammer Museum, Los Angeles; Museum of Contemporary Art, Los Angeles; Museum van Hedendaagse Kunst, Antwerp; SFMOMA; and S.M.A.K., Ghent. In 2005, Ghenie co-founded Galeria Plan B, a production and exhibition space for contemporary art. He lives and works in Cluj and Berlin. Ghenie joined Pace in 2011.
,

Having trouble donating on this site?
Let us know and we'll help you out.